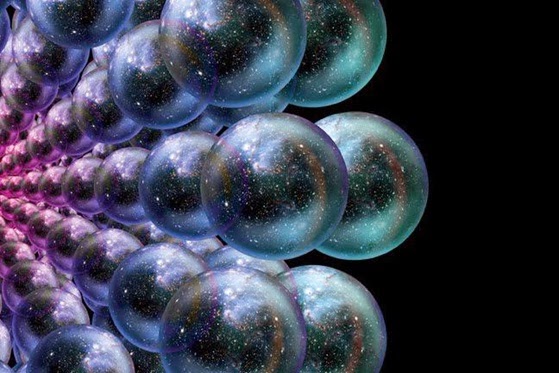 If you said the word 'multiverse' 10 years ago, people would think you're talking about a new form of poetry. Now it's part of our vocabulary, thanks to string theory. Unless something new happens in string theory, apparently the number of theoretically possible universes that might come into existence is huge. I don't know if most of them would last very long - I'll leave that question to the physicists, as I'm no physicist, just a language educator and linguist and lay theologian.

So according to the theory, the number of possible universes would be 10500 (10^500, if the superscripts don't display properly). The name of that number would be 100 quinquasexagintacentillion (ten to the 165th power, times 100) (or 100 tresoctogintillion in the traditional European system). Unless new discoveries or adjustments are made to the theory, then the theory, according to physicists, may imply an eternal inflation. Universes keep popping in and out of existence. Or in one version of the theory, different universes exist in different "branes." Two branes collide, leading to a big bang and the creation of our universe; then the  universes fizzles out due to dark energy expansion over a trillion years time, it collides with another dead universe, leading to another big bang, and it starts all over again - the new cyclic model of the universe and multiverse.

So my question as an amateur theologian is, how does that square with a theological worldview of the cosmos? It is obviously problematic for the traditional Christian doctrine of creation ex nihilo, though this doctrine may not necessarily be crucial to a biblical understanding of Genesis. After all, Genesis 1 is a poetic account of creation that focuses on God's sovereignty over creation, and by no means commits one to a non-scientific worldview that denies what biology, geology, and cosmology tell us about things. So we've adjusted our view of Genesis only slightly to account for evolution, an old earth, an old galaxy, and an old universe. If we have to scrap creation ex nihilo, then how do we adjust our theological worldview to account for multiverses and the possibility (and I stress, only a possibility) of eternal inflation and contraction?

I suspect that maybe string theorists and cosmologists will later realize a need to posit a beginning point to the multiverse and/or branes that form the multiverse. But nonetheless, theologians need to address this, in a way that is not just arbitrary. That is, I think we need a view of creation that is not too rigid or overly dependent on a particular scientific worldview, which might change in a few decades. Nor should it just arbitarily change as the science changes. We need a theology that is robust, that can accommodate the science, wherever it may lead us. But we need a theology that is robust and God-centered, not creation-centered and thus not overly dependent on the current scientific view, so that we don't have to readjust our theology in an ad-hoc manner whenever scientific theory advances and changes.

So what are the implications for theology? I don't know, but I'll probably give myself headaches over the next few years thinking about this.I'd like to hear ideas, especially from people who know physics, cosmology, theology or philosophy well enough to contribute to an intelligent dialogue on this. Until then, as a trekkie chemist might say, live long and phosphor.

Popular posts from this blog

October 25, 2015
In John’s Gospel we have an emphasis on Jesus that is unique compared to the other gospels. John not only emphasizes his deity, but his mysteriousness. The reader is left with an impression of Jesus as a mystical teacher, in the sense that his words and actions are not only those of a profound religious teacher, but of one who is other-worldly. So often in this gospel we read of Jesus making statements that the crowds, the religious teachers, and even his own disciples sometimes could not fathom. For starters, there are the “I am” statements (e.g., I am the bread of life; I am the living water; I am the good shepherd; I am the way, the truth, and the life), which were clearly claims to divinity, for these statements in the Jewish context referred to God’s title “I am,” given when Moses inquired of his name at the burning bush. Jesus makes much use of mystical metaphors like these and others, like all the ‘day’ and ‘night’ references in this book, which portrays him as mystical or my
Post a Comment
Read more

August 01, 2007
Green eggs and ham, as a recolorized staple breakfast food, captures the reader's attention by turning this diurnal sustenance into an unexpected and apparently unappetizing foodstuff. It thus symbolizes the existential angst of modern life, wherein we are unfulfilled by modern life, and are repelled by something that might impart nourishment. The "protagonist" to be convinced of its desirability remains anonymous, while the other actor refers to himself with an emphatic identifier "Sam I am", formed with a pronominal subject and copular verb of existence. This character thus seeks to emphasize his existence and existential wholeness, and even establish a sense of self-existence, with an apparent Old Testament allusion to Elohim speaking to Moses as the "I Am". This emphatic personal identifier thus introduces a prominent theme of religious existentialism to the narrative, probably more in line with original Kierkegaardian religious existentialism, rat
Post a Comment
Read more

October 03, 2012
Paul once wrote to the Corinthians, “For I am afraid that when I come I may not find you as I want you to be, and you may not find me as you want me to be. I fear that there may be quarreling, jealousy, outbursts of anger, factions, slander, gossip, arrogance and disorder” [1 Cor. 12:20]. Gossip is diagnosed as a serious spiritual problem, not a harmless form of conversation and social entertainment, as many in the secular world would view it.   God views it differently. Gossip is the opposite of the love and grace that God wants to display in our lives. Gossip is often exaggerated (and thus, untrue), or outright fabricated. Even church people engage in gossip in a seemingly sanctimonious guise (“We really ought to pray for X – you wouldn’t believe what he told me yesterday!...”). Whether secular or “christianized,” gossip betrays trust.          “A gossip betrays a confidence, but a trustworthy man keeps a secret” [Prov. 11:13]; “A perverse person stirs up dissension, and a goss
Post a Comment
Read more